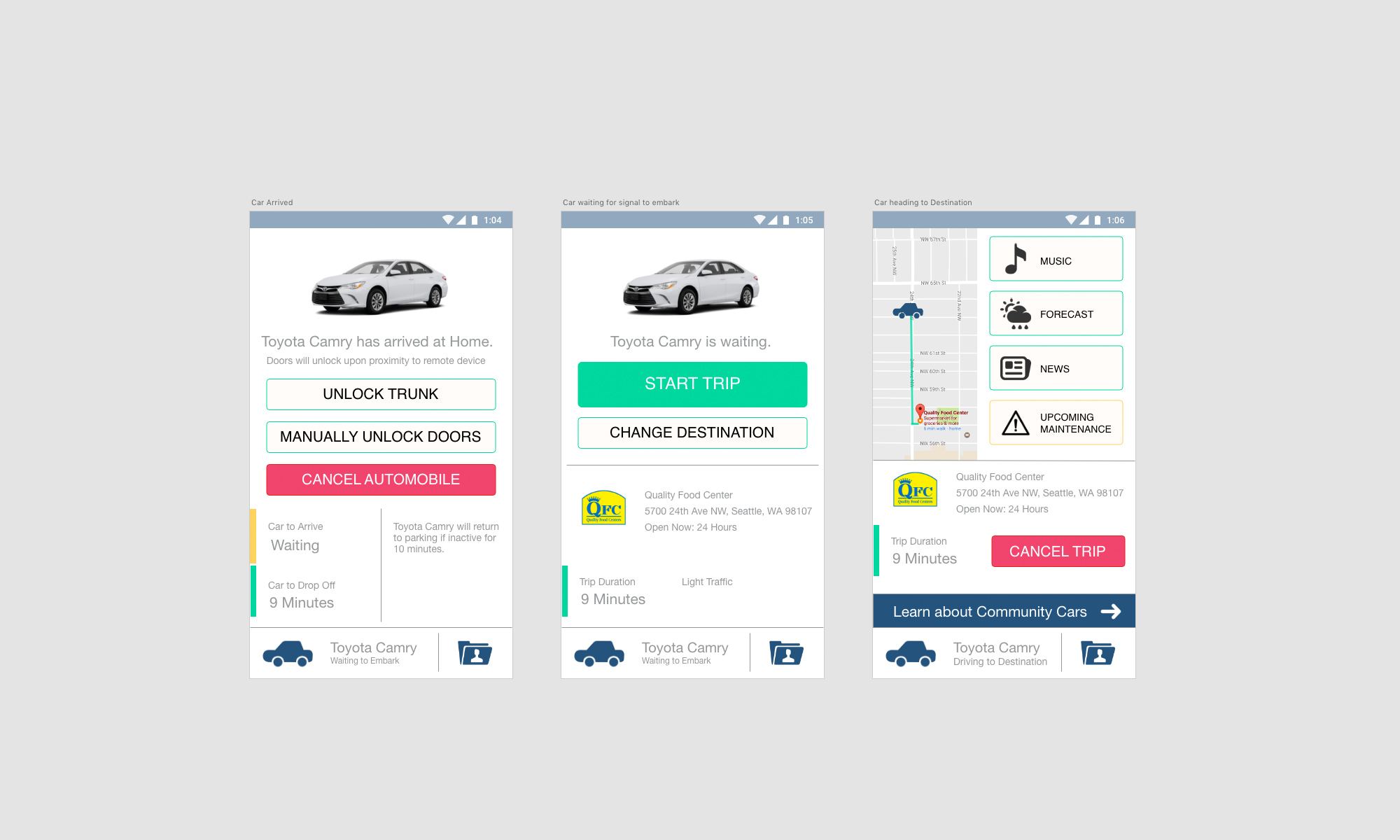 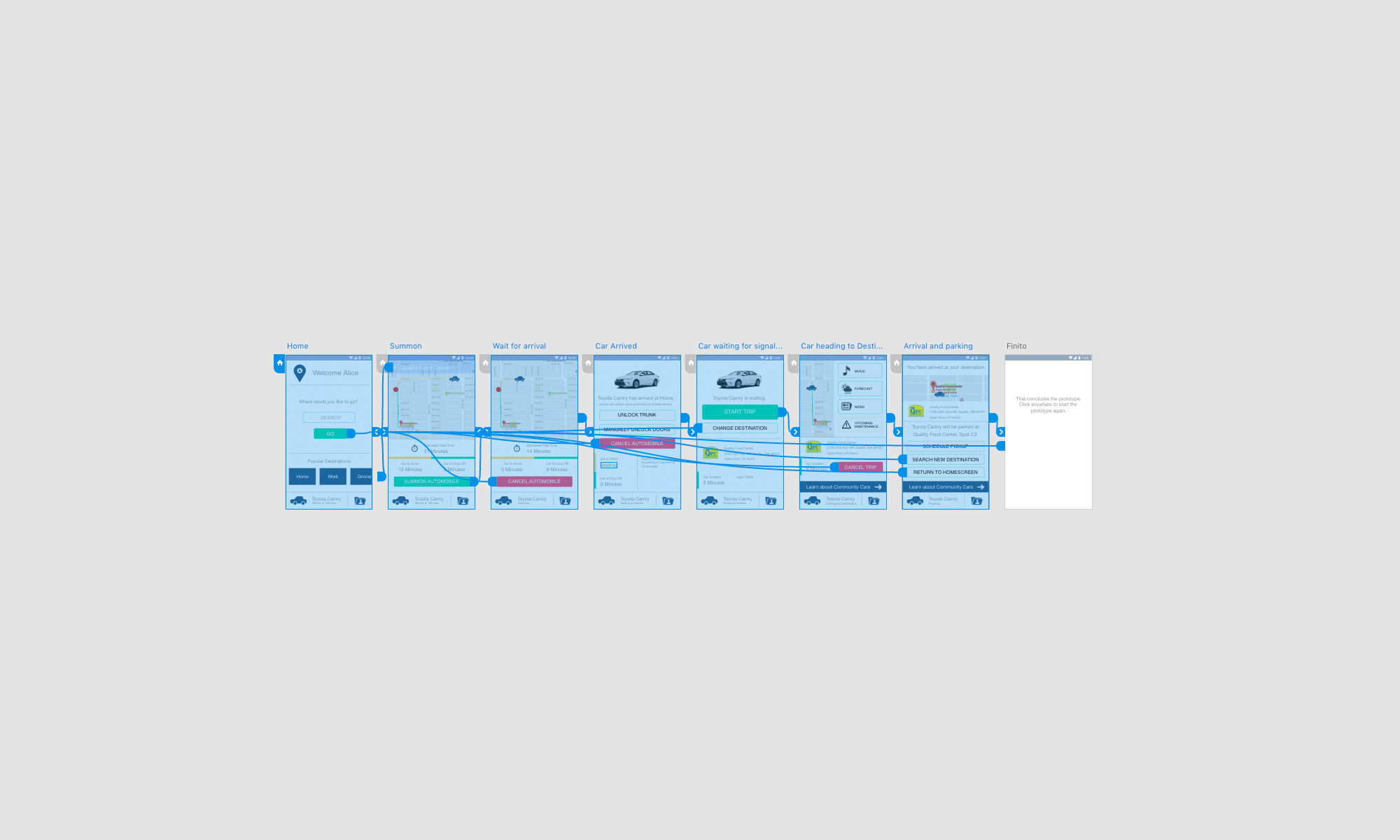 Userflow through the app

I initially was planning on this app to take place in the farther future, perhaps 20 or 50 years from now. This led me to try and reimagine our infrastructure and the way our cities connect. It also led me to think about smart phones and technology in general and what that could look like, but ended up scaling back and developing within what many users would have available right now, which is a smart phone.

Visiting Europe also gave me a glimpse of how a community could be more personal and feel simply more communal if cars were not such a focal point. No personal garages, but sidewalks or bike paths. Streamlined traffic systems for efficient short-range travel. Bringing communities together and built around culture and neighborhoods instead of the disconnect streets currently proffer.

The overarching goal of the project would be to imagine communities built with walkability in mind instead of having roads splitting blocks up into separate sections. I wanted to work on an app that would act as the bridge/tool and would require a plug-in device to current automobile computers where users could call their automobile similar to Uber or Lyft but without having a driver or the burden of buying a new car.

This project has quite a few hurdles on obtaining relevant research. Because autonomous vehicles are not available directly and the automobile plug-in is a theoretical object, I had to get creative how I screened users. I had 4 participants and decided to screen them based on their use of Uber and taxi services, public transit use, automobile ownership, and openness to try a new technology like this. This technology is on the horizon and getting access to this sort of tech was out of reach. 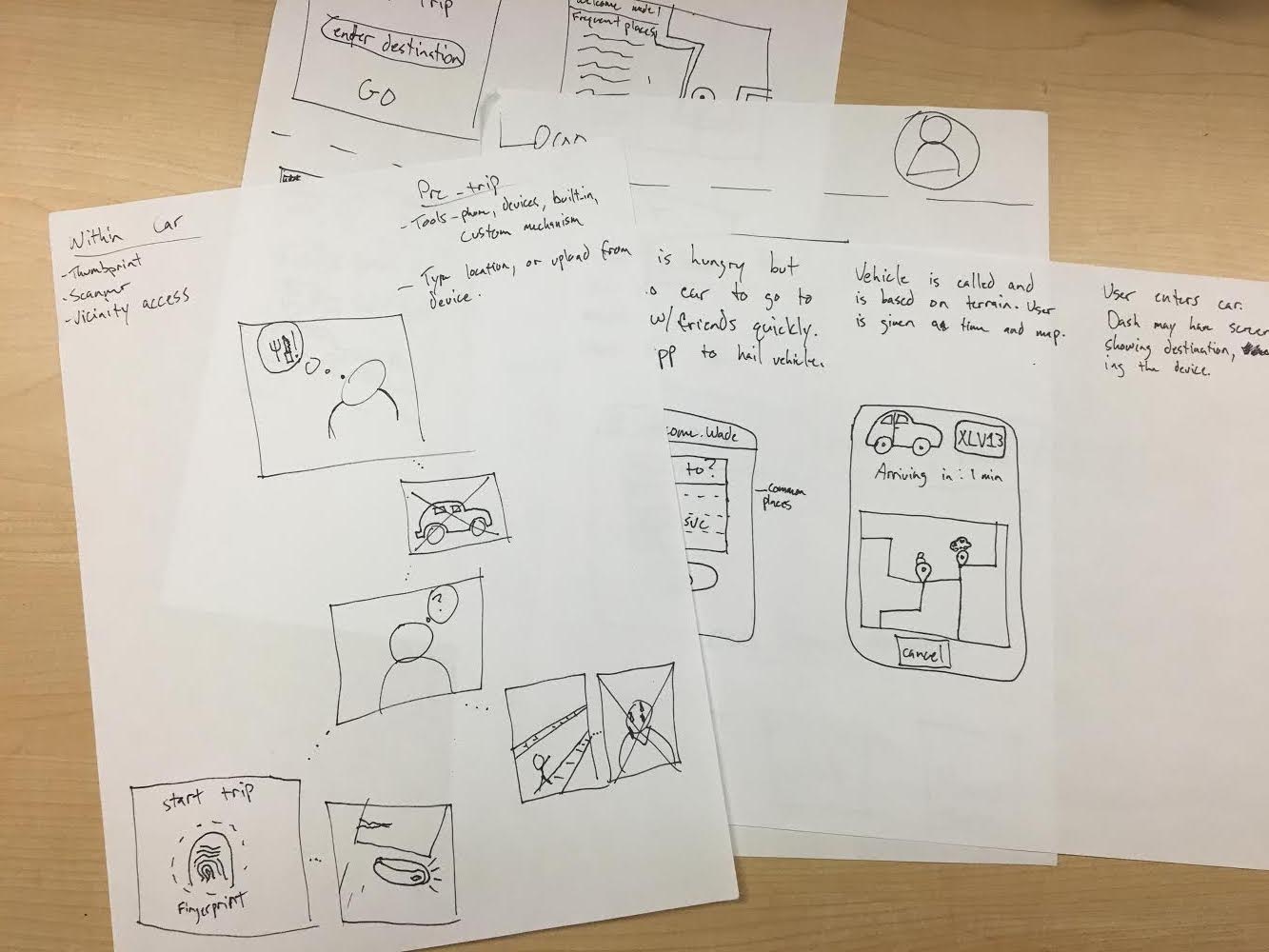 During this stage, I sketched out many various versions of the prototype I wanted to build. As I started the sketches, I kept learning more myself about the functionality of the app, and reiterated on the spot. The user flow in this app is extremely important and needs to be absolutely clear to the end user because it can be such an immersive function of their daily lives. While prototyping this app, it gave me a great sense of finding the value to a user and I redid many steps along the way to make it more streamlined and less cluttered. 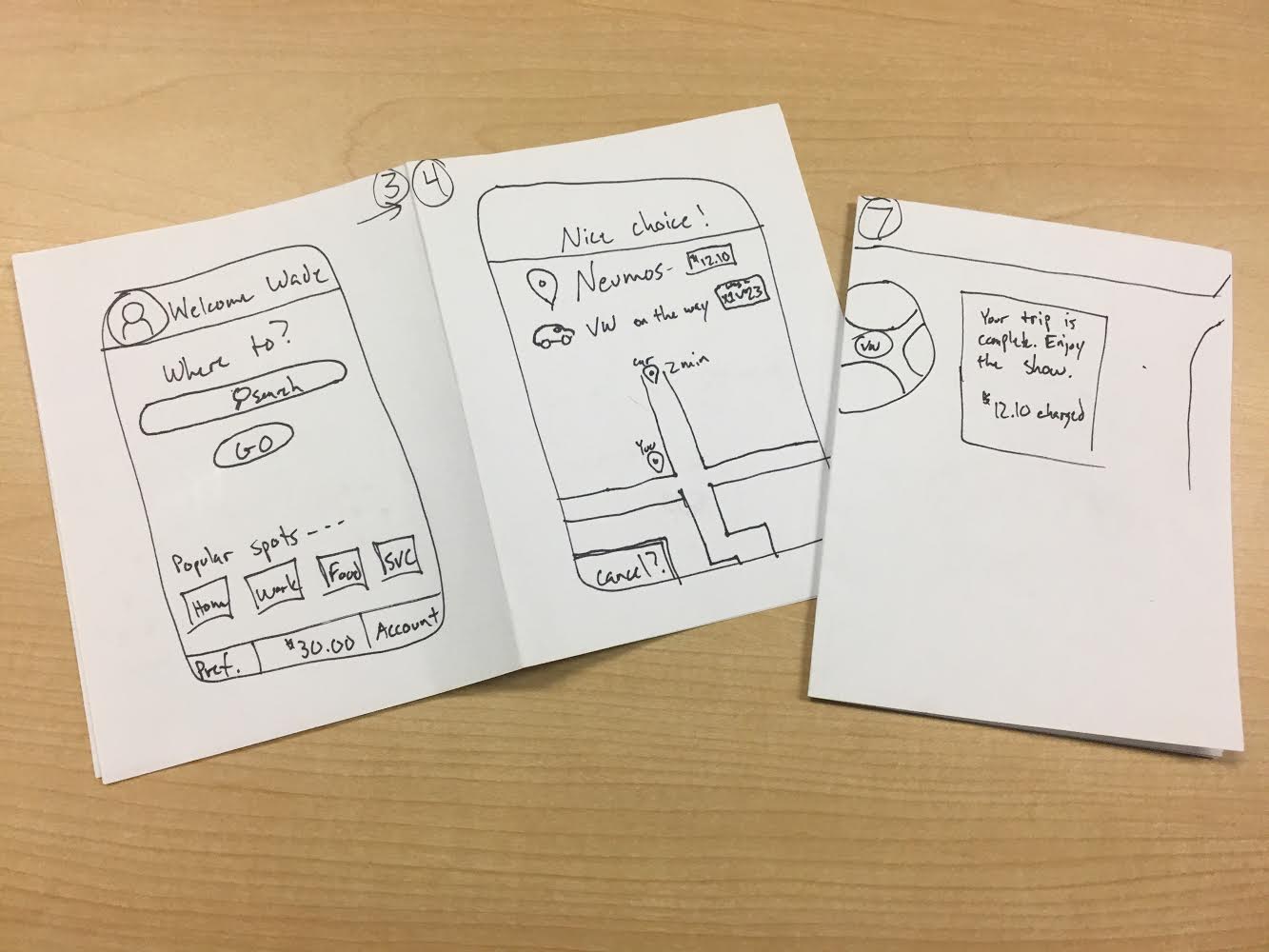 I had to begin my test with a scenario, since I do not have an autonomous vehicle. That task put the user in a scenario where they were going to meet friends at a show that was just about to start and would be too slow for other forms of transportation to get there on time so they would have to use the app to call their car to get there instead. I tested 3 people for this initial paper prototype. Many great questions came up from the very first user and I needed to pivot and define a few issues:

How does the vehicle know it’s the right user? Proximity to smart phone, fingerprint, scan, etc? These were all major questions I had to address to the users and it was extremely insightful to run through these initial tests. I ended up changing the task for the last user to be more straight forward. Instead of meeting with friends, it would be grocery shopping which would require them to carry items in a vehicle. 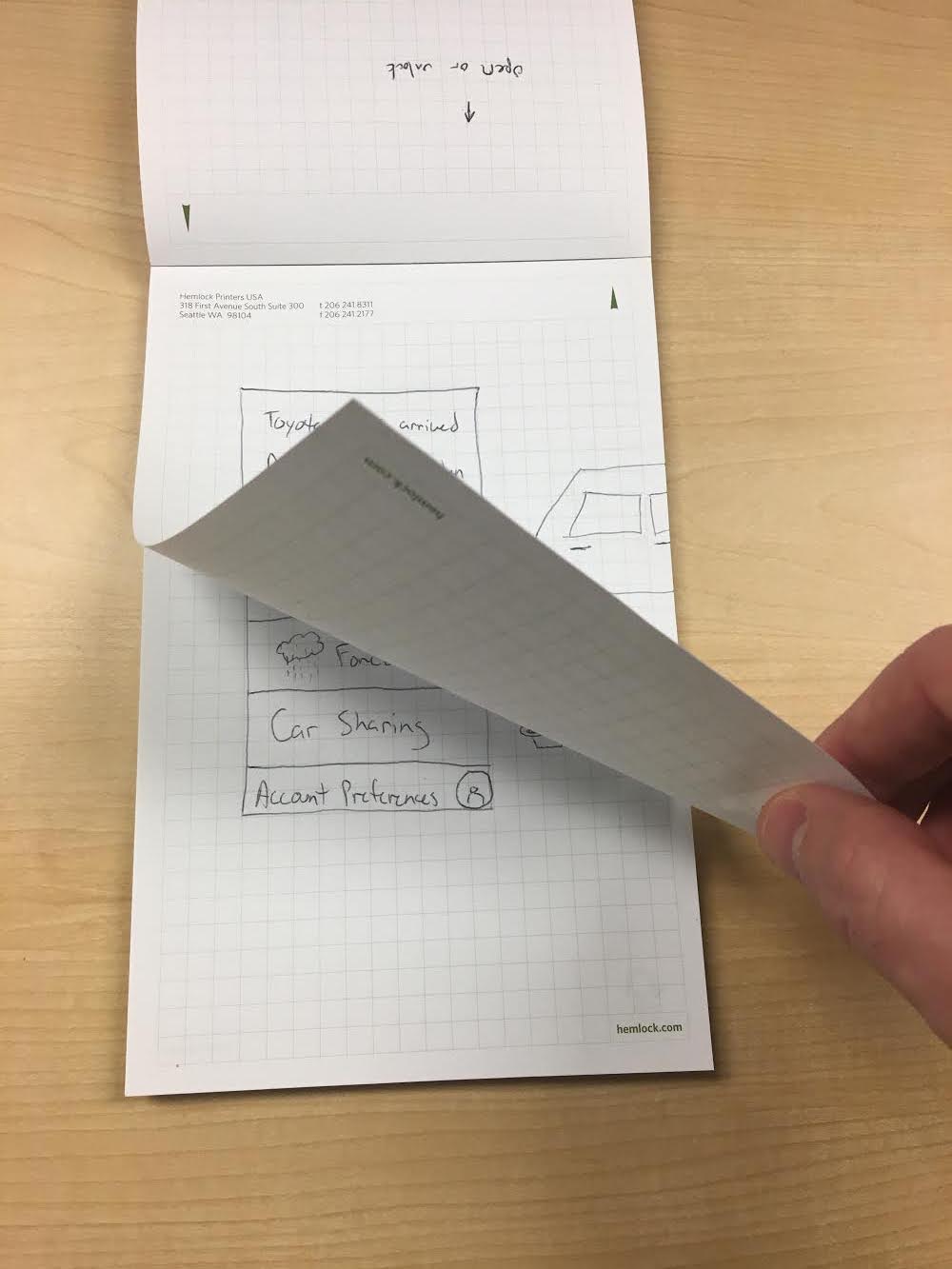 I redrew my paper prototype on a flip notebook for easier prompts for the user to use and, in turn, helped me to draw out the screens on the grid format. In addition to the new prototype, I began a more high fidelity prototype and wrote a script for my users to reflect the new scenario.

I stripped out all of the material from the initial versions that were essentially features instead of a minimum viable product to pare down the bandwidth for myself and the user. I tested 2 users for this last test, and found it to be much more concise than before with the users navigating much easier.

The prototype is still quite low fidelity and was built using Adobe XD. I hope to refine the look in the future to give a much more polished look, and might port it into Axure to help with some interactions that will help move the user along when using the app.